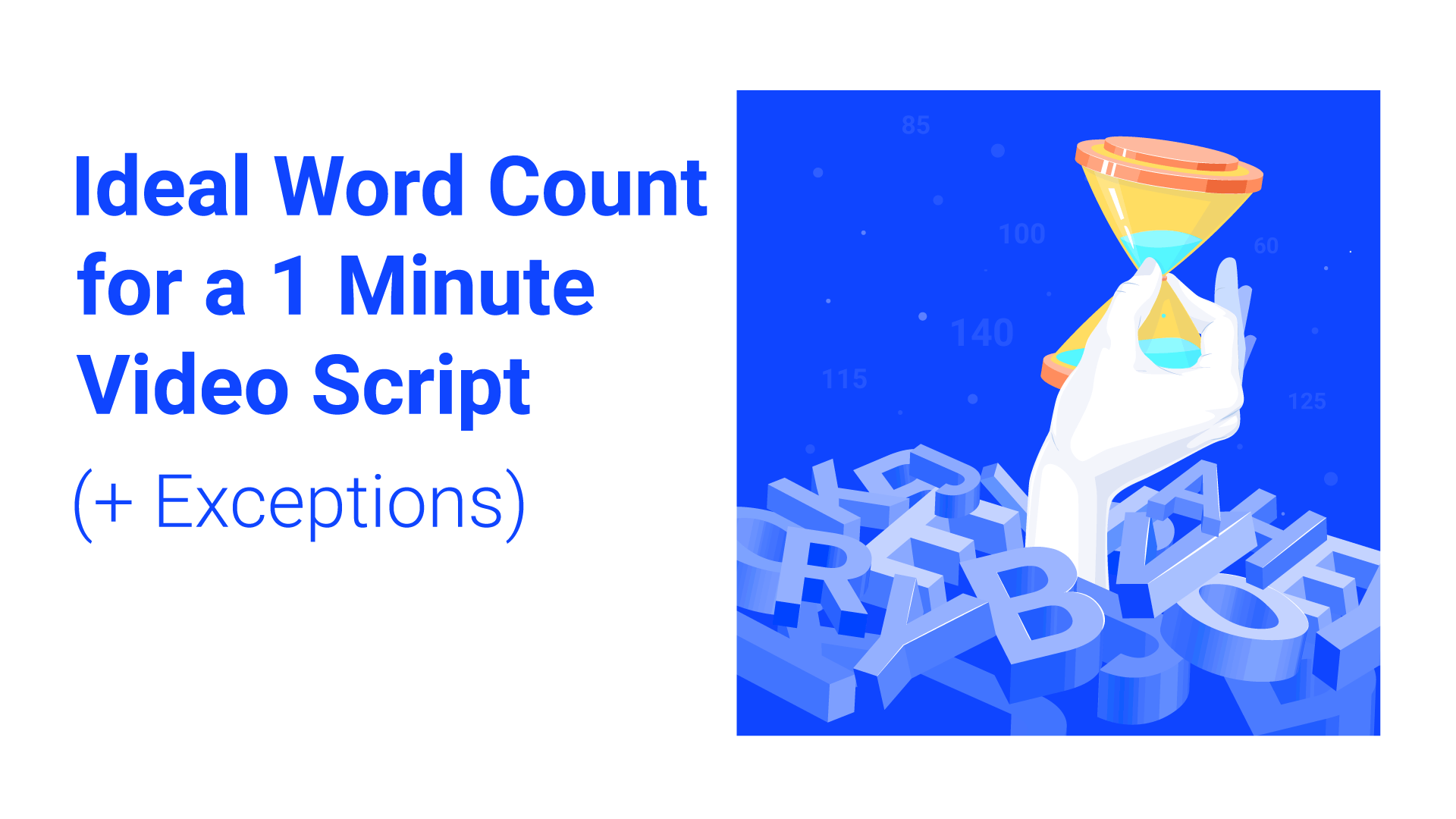 Based on our experience writing over 400 video scripts for various companies, we know that clients rarely understand how the word count limit is defined and why.

And it’s okay! We don’t expect you to be a professional writer.

However, you can become much better at reviewing and evaluating video scripts by getting familiar with the best practices relating to scriptwriting. And it all starts with knowing when to end your script, and when not to.

Read next to find out what is the ideal number of words in one minute of video, and how to deal with exceptions.

When dealing with an explainer video in North American English, you can safely aim for 140 words per minute (wpm).

Even though the average speaking rate in the United States is around 150 wpm, this adjusted word count limit allows adding pauses and emphases, where necessary, as well as a proper intro and outro.

140 wpm can be just right for 1 minute of a “normal” explainer voice-over when you have a narrow audience with at least some shared context.

However, this rule of thumb is not always applicable. Here are the most common cases when we recommend aiming for a different word count.

Whenever that shared context or history is lacking, viewers need more time to digest new information.

That’s why educational videos generally have a slower pace (around 120-130 wpm) and more pauses added for better comprehension.

On the other hand, by removing complexity and making your message shorter, you can machine-gun information much faster.

Online commercials, especially the ones shorter than 1 minute, can include voice-overs that reach as high as 250 wpm.

Maybe your video is indeed a commercial, but your marketing strategy still requires a calmer, more relaxed tone of voice.

The tone of voice can also change during the video. Faster speaking can convey excitement or create tension, while slower releases it and calms listeners.

Professional writers use punctuation and italics (for emphasis) to indicate the tone of voice in the text itself, so you can get a feel of it before consulting a voice-over artist.

Reading takes more time than listening. If your video has lots of on-screen text that doesn’t match the voice-over, the viewers will need more time to digest it.

Consider shortening the on-screen text to the bare minimum and including the necessary details in the spoken words.

On the contrary to the previously described situation, visuals that match your voice-over can improve comprehension and actually allow for a higher voice-over tempo.

Consider using visual clues to assist your voiceover. In many cases, visuals that evoke strong emotions don’t need any explanation at all.

As the saying goes, a picture is worth a thousand words.

Every language has its own default tempo that most its speakers expect to hear. Some languages are naturally spoken faster than others.

For example, Japanese is considered the fastest language in the world, while Mandarin is the slowest (right after German).

When it’s a dialogue

Having more than one speaker (or character) in your video will require additional pauses between the lines for a more natural conversation flow.

Explainer videos rarely feature dialogue, but it’s not that unusual to hear two speakers in educational videos (e.g. a student and a teacher) and brand videos (e.g. multiple customers or employees).

Now, knowing these best practices, don’t forget that regardless of how long or short your video is, it has to be comprehensive.

Whenever in doubt, go for a slower pace and lower information density. It’s always better to leave out a detail or two than to lose the attention of your viewers.

Finally, if you are working with a creative agency like ours, don’t hesitate to ask direct questions about the script.

Having a clear agreement on the requirements before your project goes to production will help prevent redundant edits and facilitate faster, on-point delivery.

Is there an ideal word count for a one minute video? What about the exceptions? Here's what we've learned based on our experience writing over 400 scripts.